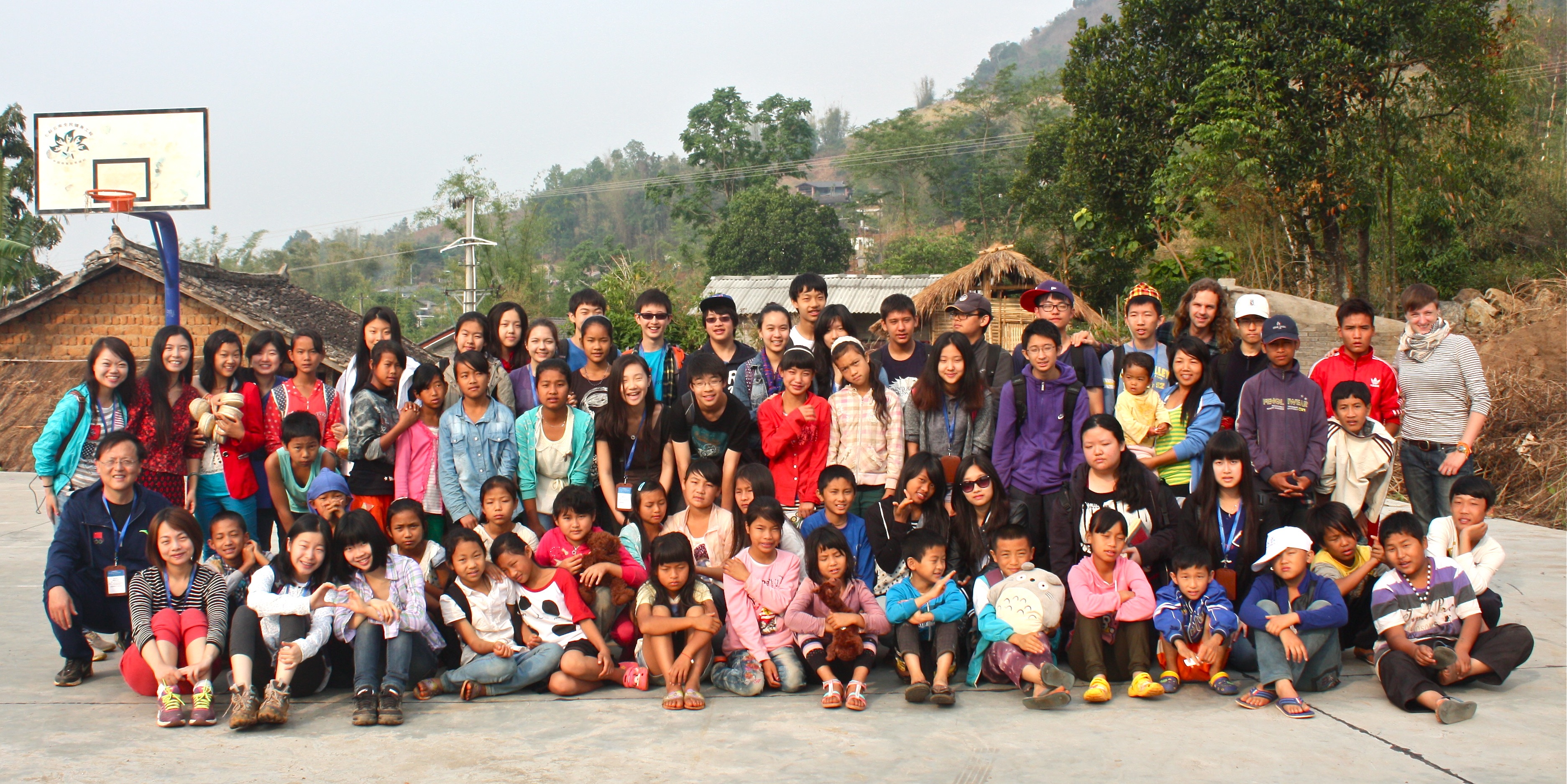 A large group from Tsinghua International Middle School in Beijing came visiting our Prop Roots center. They came to meet the local Zaiwa/Jingpo kids, that appeared in large numbers. It was a great success. Youth of both sides got along wonderfully and did a lot of interesting and fun things together. The last night’s program was overfull with songs, sketches and dancing, performed by mixed teams. So much happened in only 5 days, and saying goodbye wasn’t easy. Never do our camps end without hugging and tears. 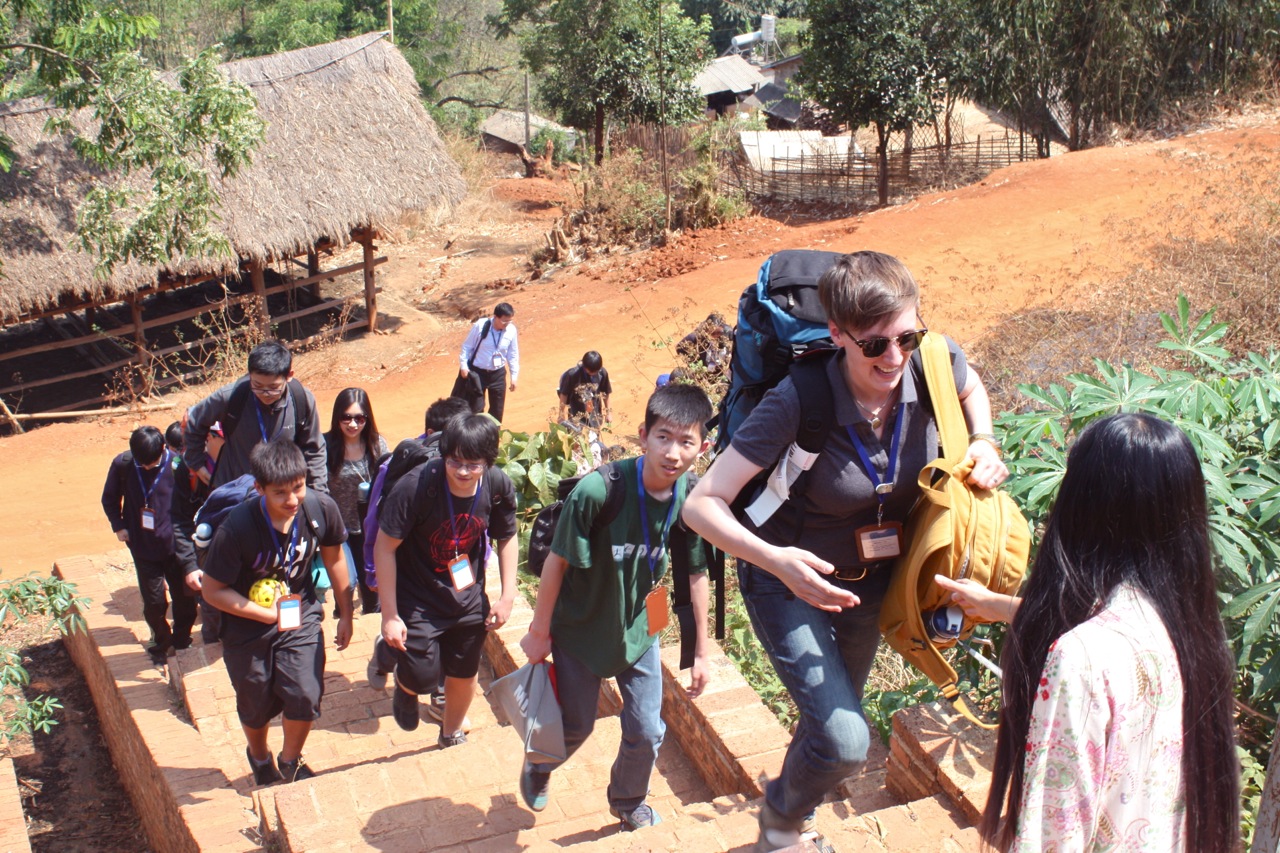 - Arrival at the Prop Roots center

This cooperation is the happy outcome of an old friendship. Six years ago Li Yang and I met Georgia Barker in Beijing. She now works at Tsinghua International Middle School, teaching her anthropology course, aiming at raising her students’ awareness of social issues and cultural diversity. Two more teachers came along, including the principal himself, as well as two people from the international travel agency WorldStrides, including its president. 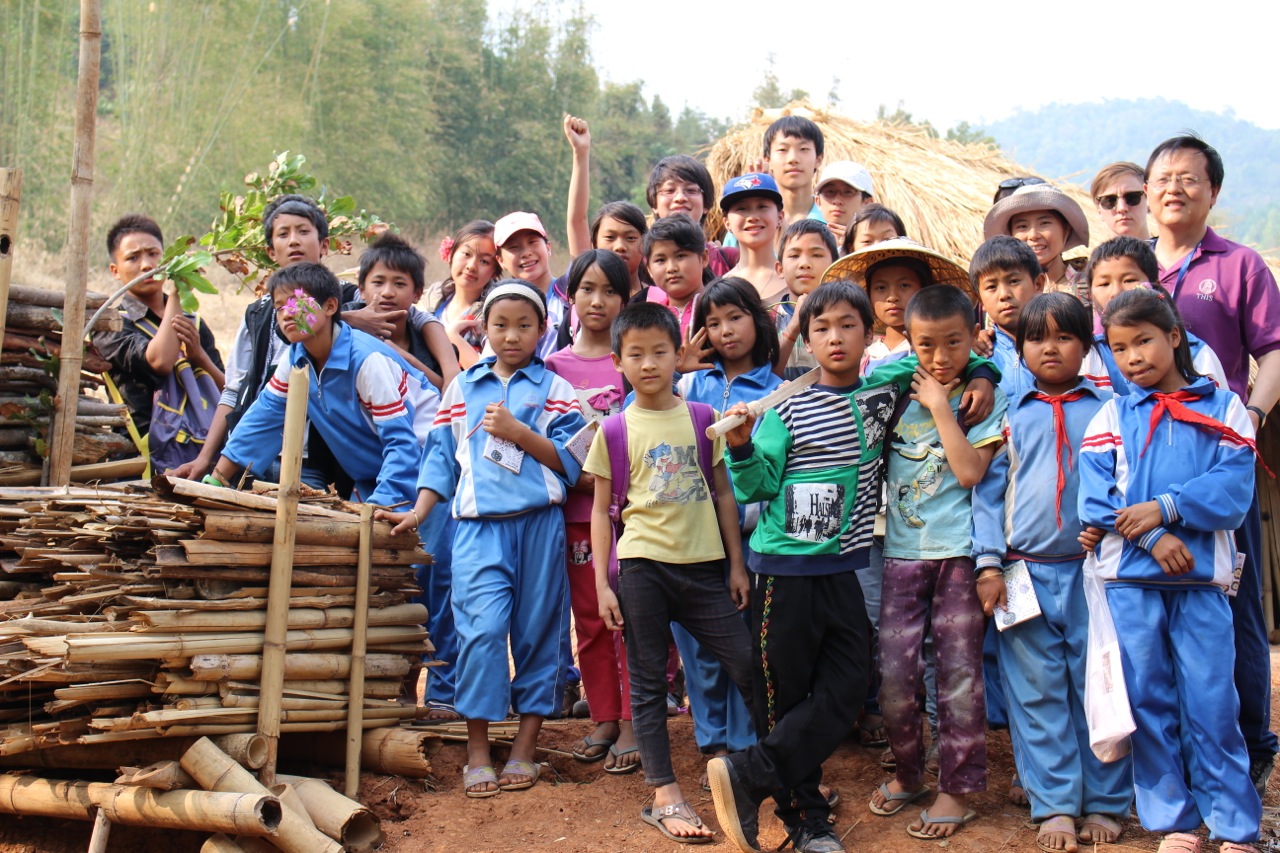 Some of these 25 youngsters are overseas Chinese from various countries, some are foreign kids living in Beijing, and most of them are bilingual in English and Mandarin. It was their first time in such a “remote” and rural place like ours. Their average age, 15 to 16 years young, was a few years above the average of our local kids, but that rather was a good thing, being more receptive to our introductions and more considerate towards their younger counterparts. 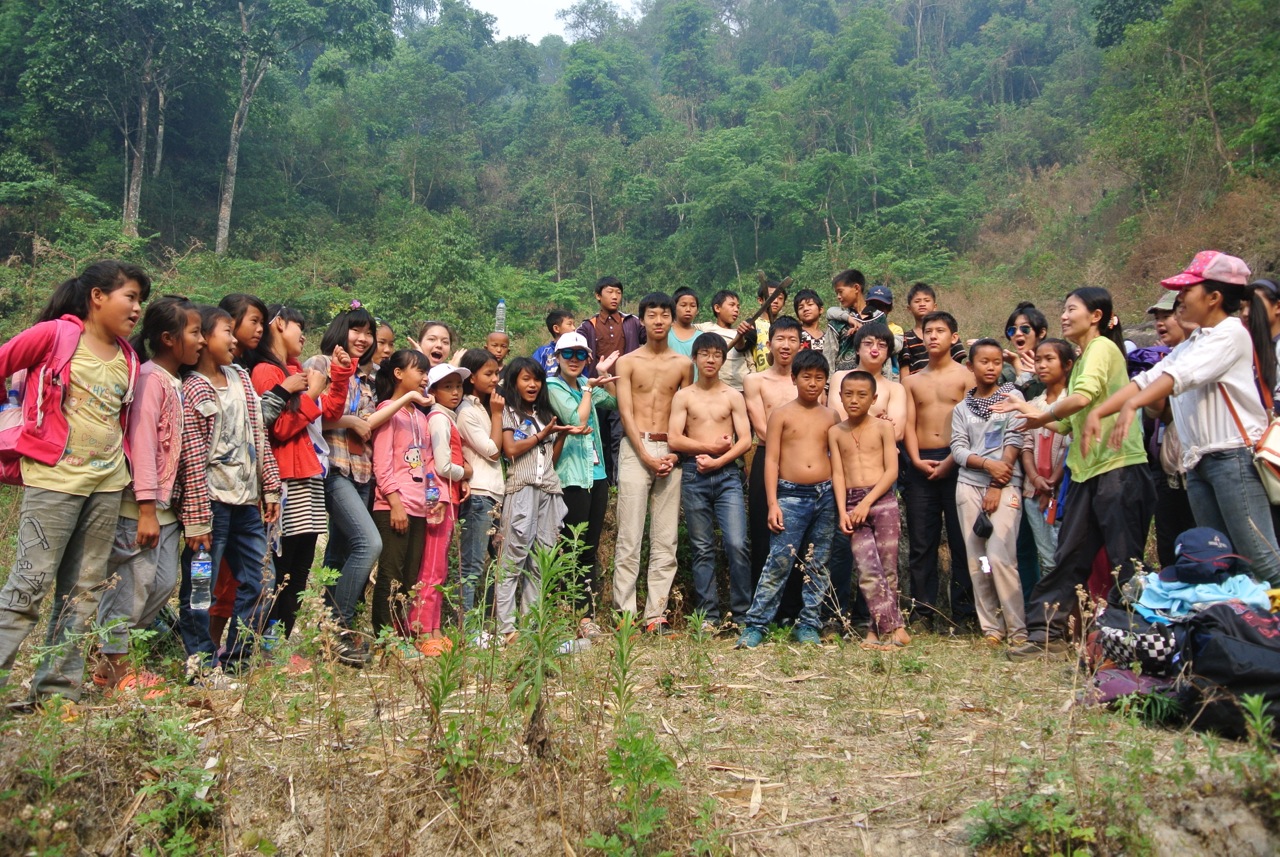 Shortly after the Beijing group’s arrival at the center, we took them to Yingpan primary school, where all local kids had already lined up into a long welcoming corridor, in full Jingpo attire. Everyone took part in a massive Manau dance under the school’s majestic banyan tree. Anton had his debut as a Naushong dance leader, side by side to the, luckily, much more experienced headmaster, Mr. Shi.

Manau dance at the opening of Prop Roots Spring camp 2014 from Anton Lustig on Vimeo.

After this exciting ceremony, the mingling and mixing between the two sides got fully started. Everyone had prepared little presents and there was a lot of singing and laughter. The first night we had “only” 35 sleepers, while during the remaining 3 nights we housed over 50 sleepers. At daytime it was even more crowded in our Prop Roots center. After the camp was over, the tatter and chatter, chaotic pinging on all kinds of musical instruments still kept echoing in our ears for days. But that is part of the fun as well. We dare say that everyone involved was enthusiastic. Apart from that last morning when the big bus came…

Also see this other story about the Spring Camp:
Building stairs, connecting the Prop Roots center to the village - hard labour in great teamwork

Forthcoming are more photo-stories, including: 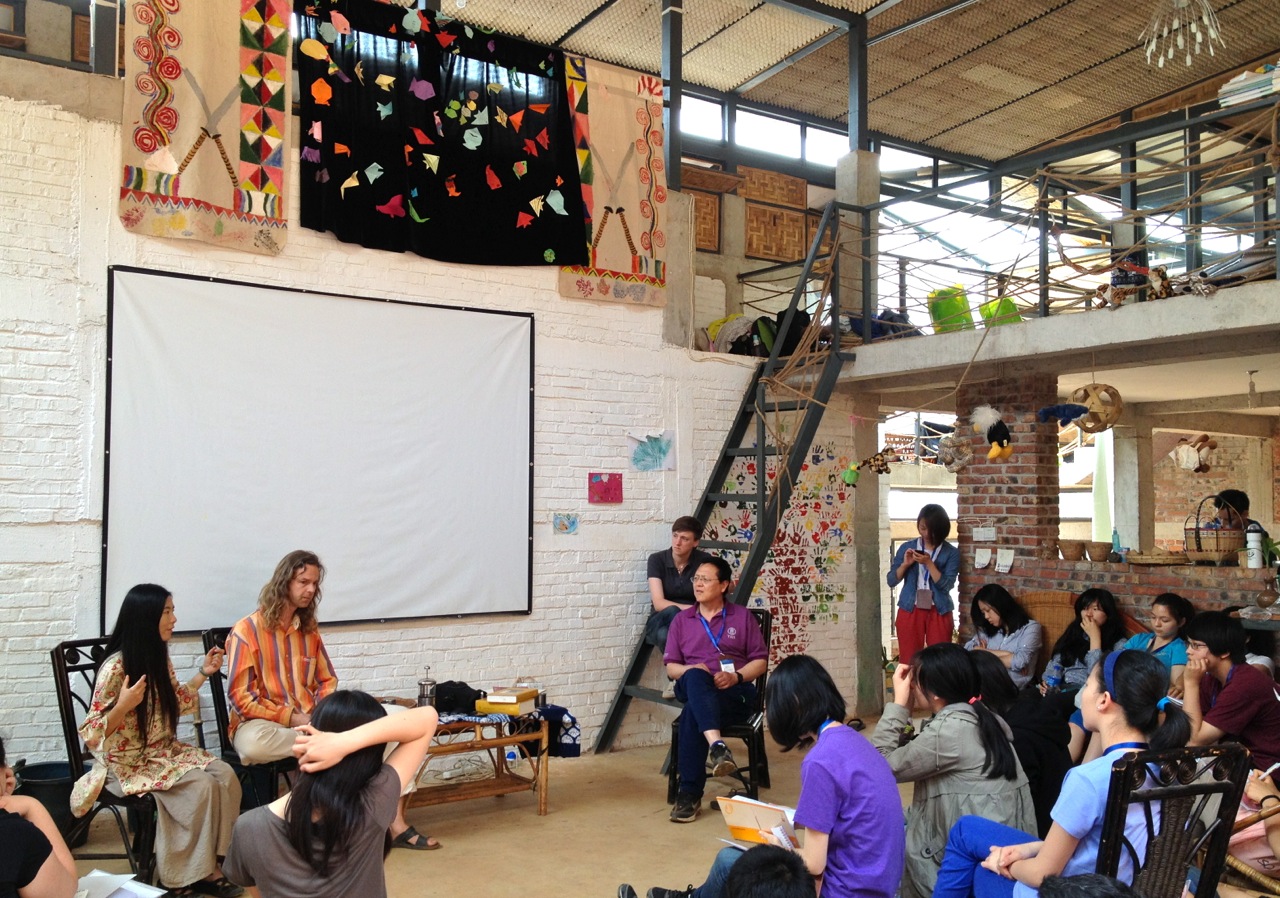 China’s Jǐngpō ethnic minority lives in a subtropical outmost tip of the country, surrounded by Myanmar territory. That is where Dutchman Anton Lustig and his wife Li Yang lead their non-profit organization named Prop Roots Program, providing language and creative education and intercultural exchange to the local children, in order to give these kids more confidence and help them take their future into their own hands, as soon as they grow up in a society characterized by low chances, cultural erosion and massive problems around drugs and hiv/aids. Li Yang is originally a lawyer and communications expert for international NGOs. Anton Lustig is an artist, sinologist and linguist, the world’s leading specialist on the language spoken by the majority of the Chinese Jingpo (named Zǎiwà language.) Such as is spoken in the villages around the lush, green slope where Anton Lustig and Li Yang have erected their Prop Roots Children’s Activity, Arts and Culture Center, and where they are permanently based, joined by numerous volunteers and, of course, lots of children.

How good it was to be back in the lush and green Loilung village, my “second home”. I have spent many years in this Zaiwa/Jingpo ethnicity village, if I count up all

A large group of children, from an international high school in Beijing (the Tsinghua University Affiliated Middle School), is coming in just a few days, for a joint camp together with the local