How good it was to be back in the lush and green Loilung village, my “second home”. I have spent many years in this Zaiwa/Jingpo ethnicity village, if I count up all those separate periods I did research and lived here since the early 1990’s. Having based ourselves and our grassroots project in yet another Zaiwa/Jingpo village on a 3 hours’ drive, we now don’t live far away at all, yet we have been too busy to come back more often than once a year. This will have to change, because we really love this place. Like every time, the Loilung grownups look slightly older again, while their children have been growing and changing amazingly. Everything feels so familiar here, and all kinds of memories started coming back to my mind.

We came with 8 children from our “new” village, staying two nights at Ledvu & Megvai’s lovely home. (I will introduce you to them and their home later.) Our mission was to perform our puppetry show to the Loilung community. Another goal was to meet the old Pauzyang Gvadvom, former village chief and great storyteller, in person. 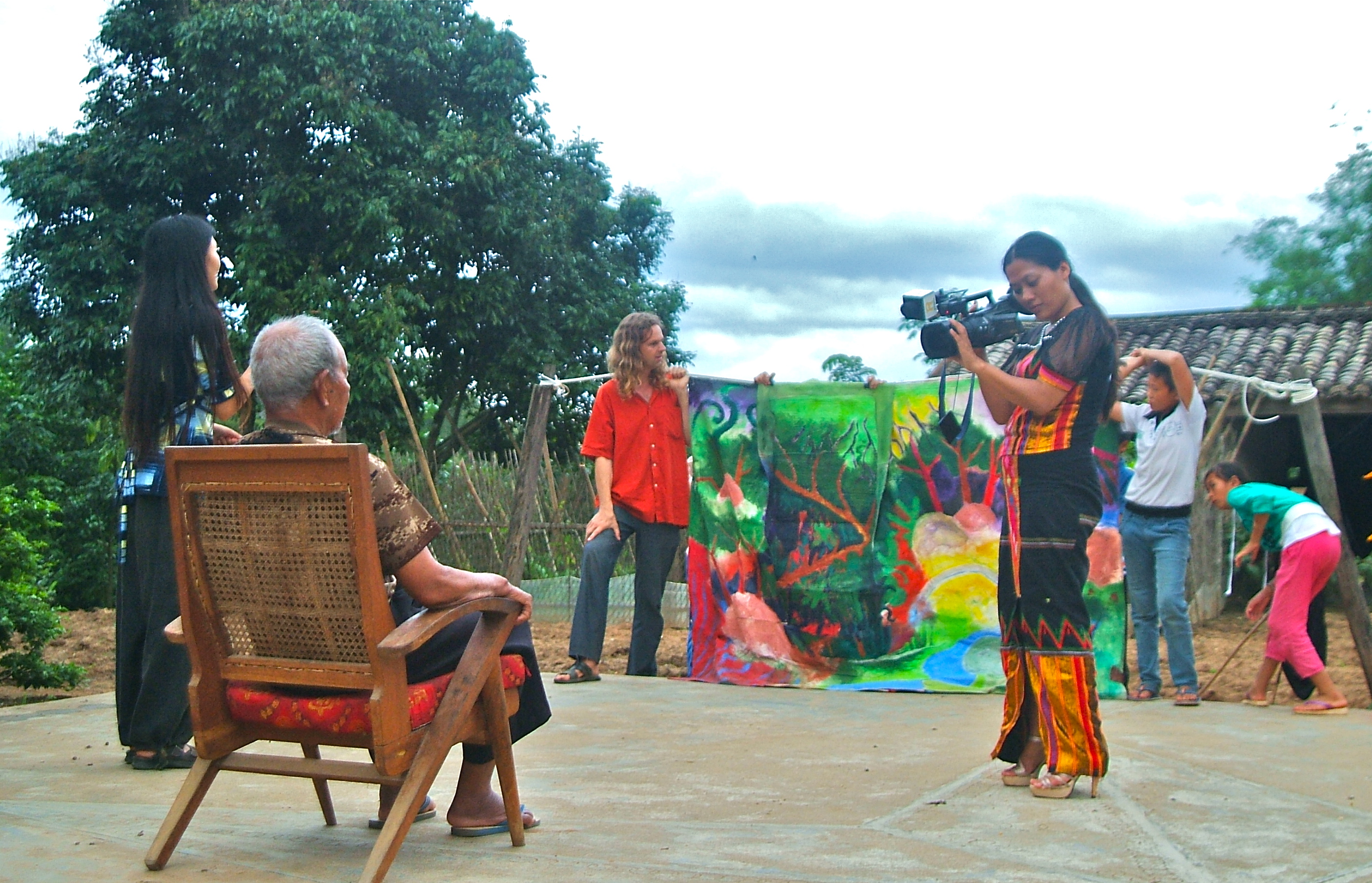 (1) Playing the puppets for Grandpa

Pauzyang Gvadvom moved down from the mountain to live in the relatively lower Loilung village, where he can be taken better care of. He is now 97 years old, and not as strong as last year, before his cerebral hemorrhage, when we was still living alone on the mountain top, herding his cows every day. “Look, my arms have become thinner.” We gently squeezed him and couldn’t deny that, but most of all we were glad he’s still in relatively good health, and as clear-minded as ever.

He’s the one who told me the Zaiwa fables (in the appendix of my Grammar and Dictionary of Zaiwa), 20 years ago when I stayed for the night at his wooden house on the mountain top, scarcely led by a smoky fire in the middle of the central room, surrounded by the forest.

What makes this old man such an intriguing figure for the children attending the puppetry classes at our Prop Roots Children’s Activity Center, only hearing our stories about him? “Grandpa” has a charming appearance, and the kids believe us when we say he has experienced a great lot in his long life. He was a soldier in WO II and village chief for 20 years and has lived through enormous changes in the Jingpo’s society and lifestyle, things that the children are only vaguely aware of. But what makes him especially cool is his calm perseverance, for many years guarding the now fully excavated old village on the mountain top, after everyone had migrating downwards. “As long as I am there, the village still exists.” His children are well-to-do and he is welcome to live with them comfortably in Ruili city. He did stay there for a few months, last year, but only for his treatment and recovery. Even when still hardly able to sit upright in his wheelchair, he boldly persisted we would walk back to Loilung mountain if they didn’t immediately take him there.

The following tiny (and somewhat crappy) video was meant at conveying our group of children’s good wishes for grandpa’s health, half a year ago, when he was still fighting for his life, while everyone thought that his final day was soon to come. (Spoken in both Mandarin and Zaiwa language.)

That sunny morning grandpa was unable to join the local children and the rest of the community to watch our main performance at the village hall. Therefore, that evening short before dusk, we walked to his house to give him a private show. 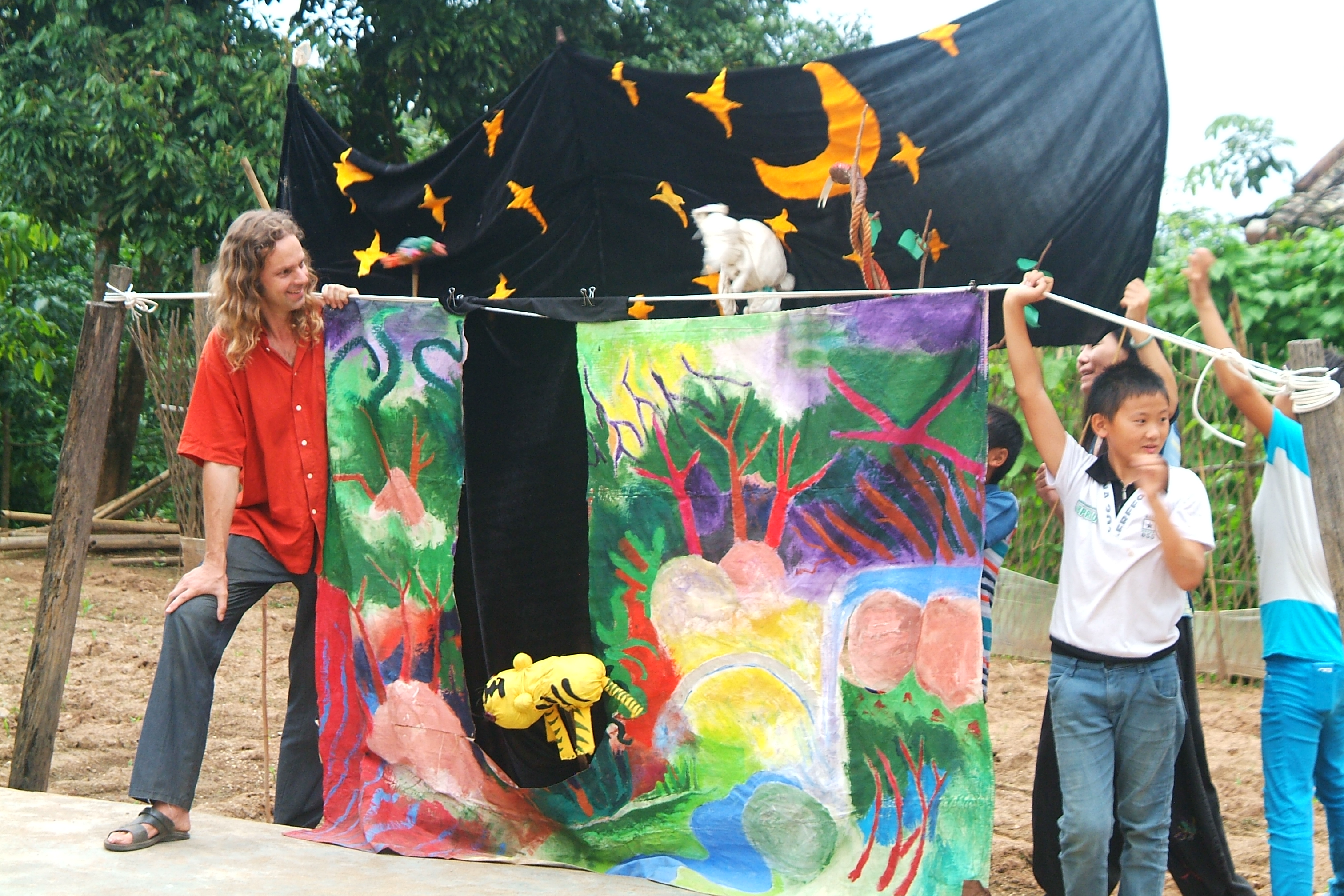 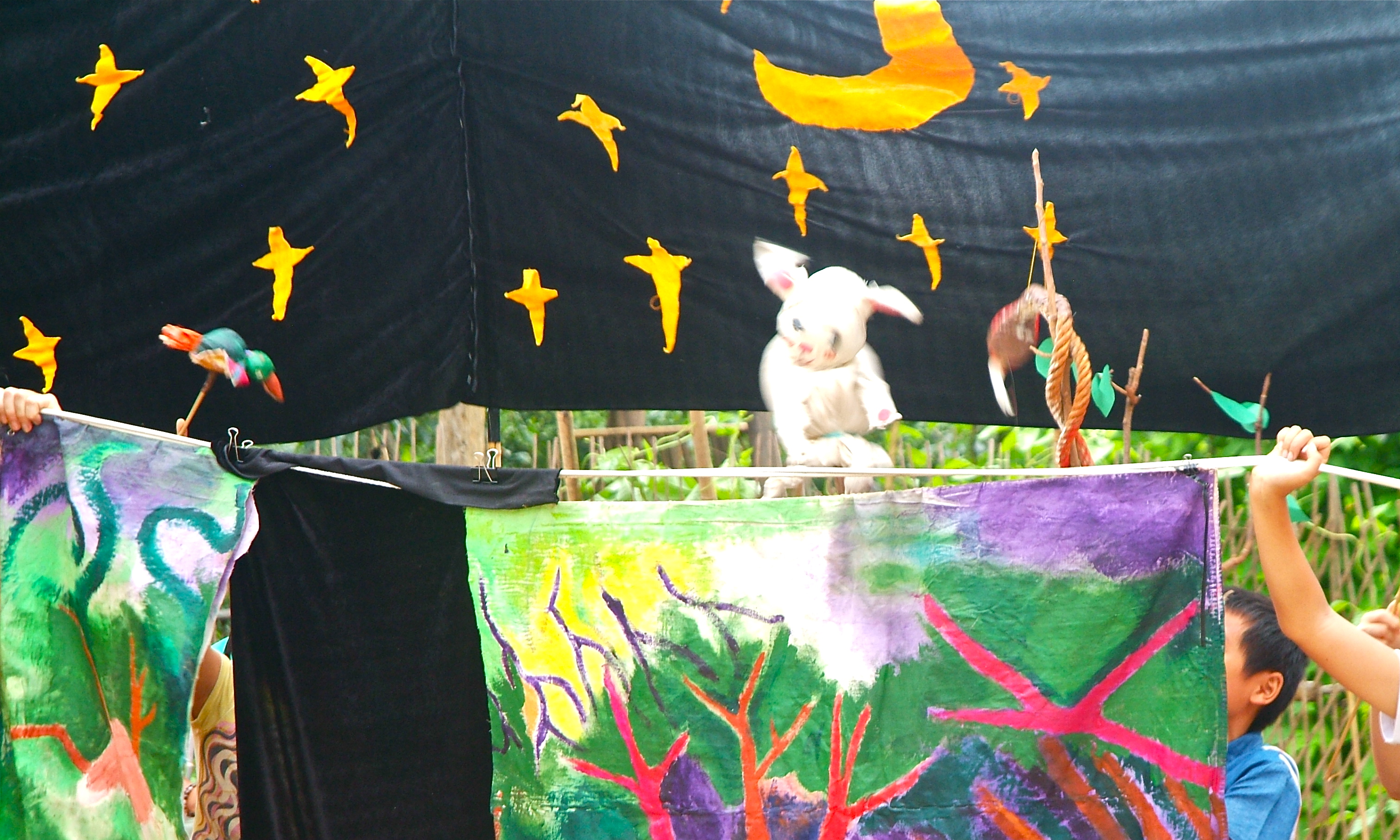 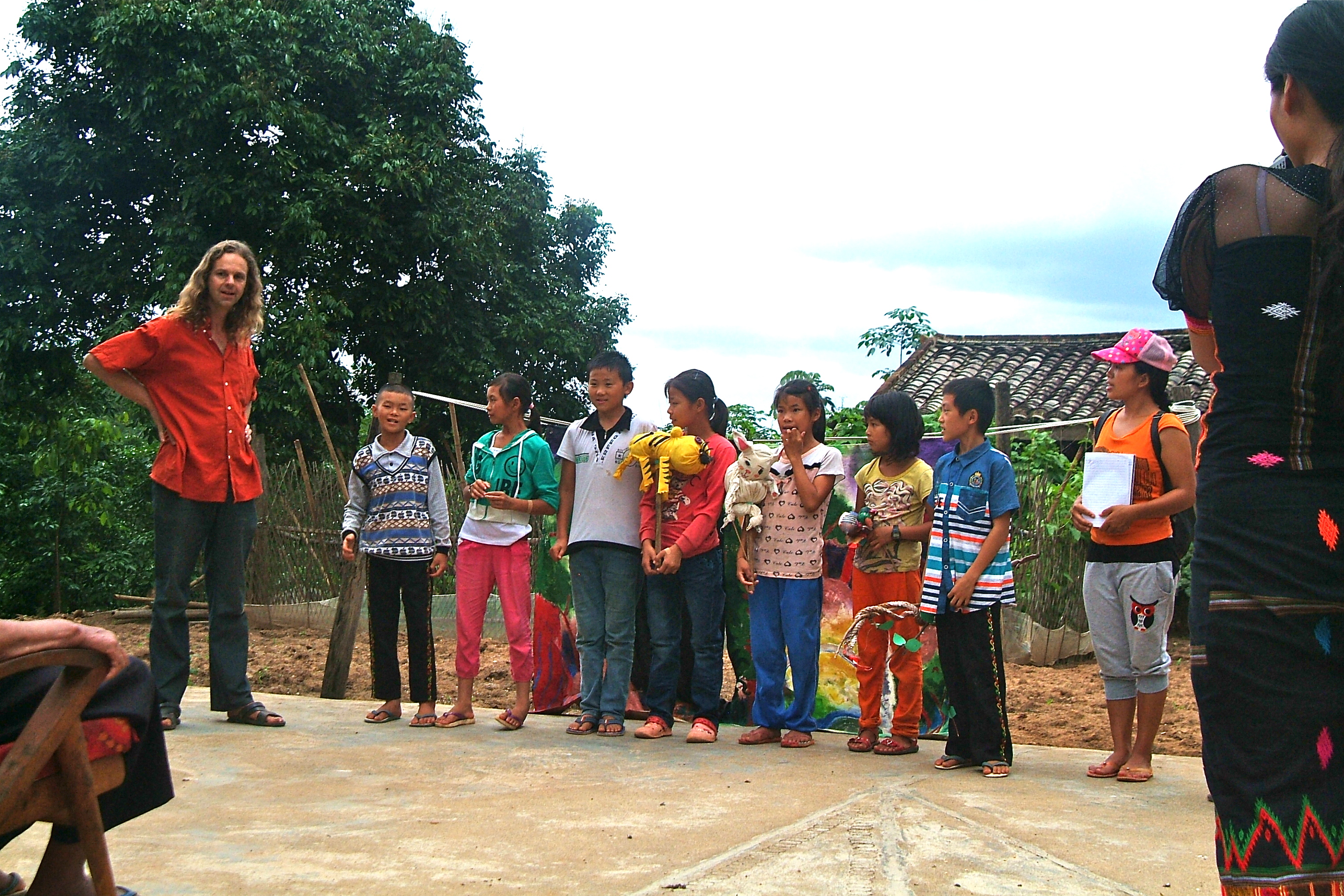 The children played the Zaiwa version of a story of Trickster Rabbit cheating Tiger, one of grandpa’s favorites. He clearly enjoyed the performance, so it looks like we succeeded at bringing him a joyful experience. One that perhaps will evoke memories of times when he was telling stories to his own children, and of when he himself was taking in these ancient and witty fables, as an excited little boy.

A video is forthcoming. This event was filmed (and broadcasted) by our friends from Ruili TV. 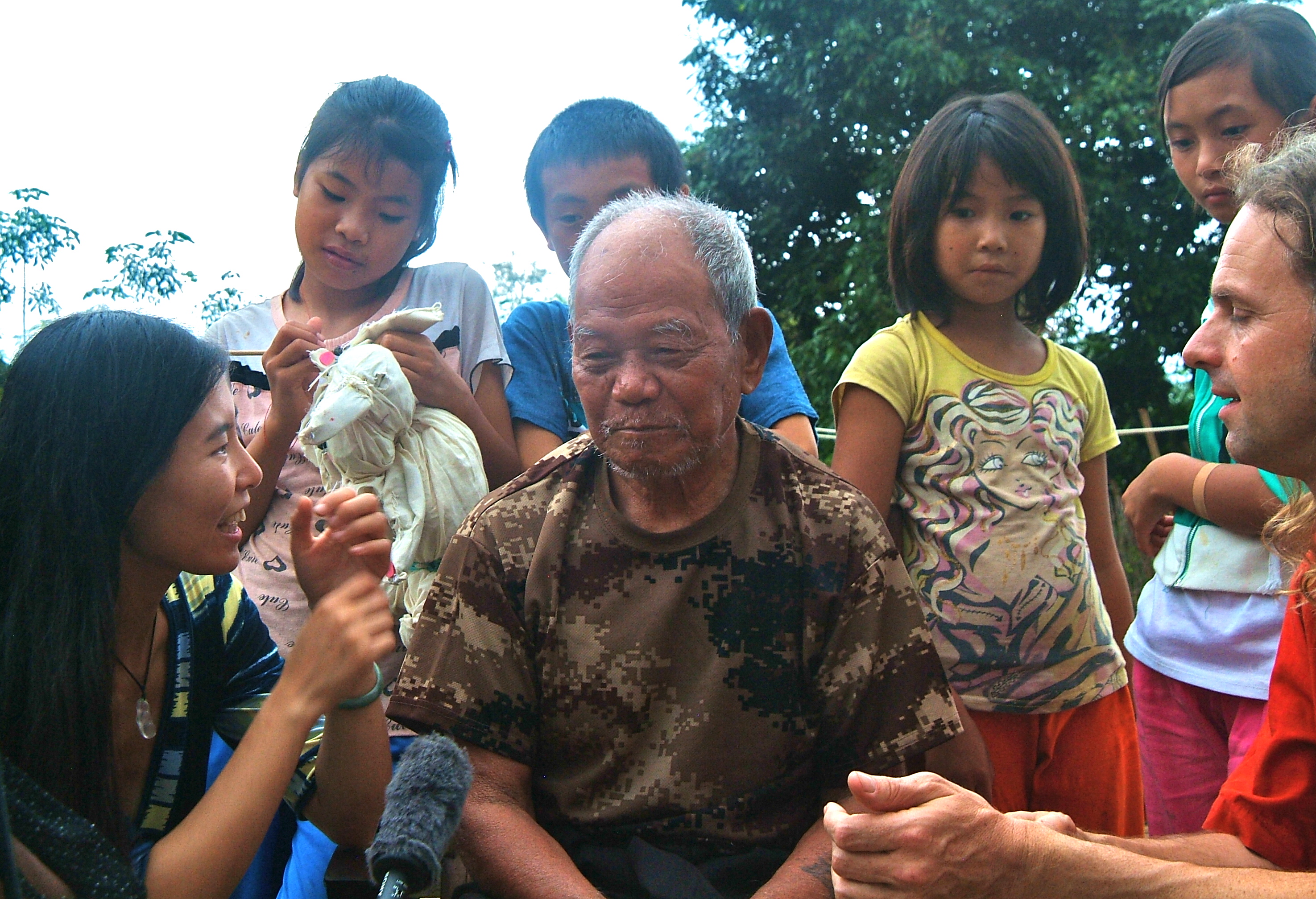 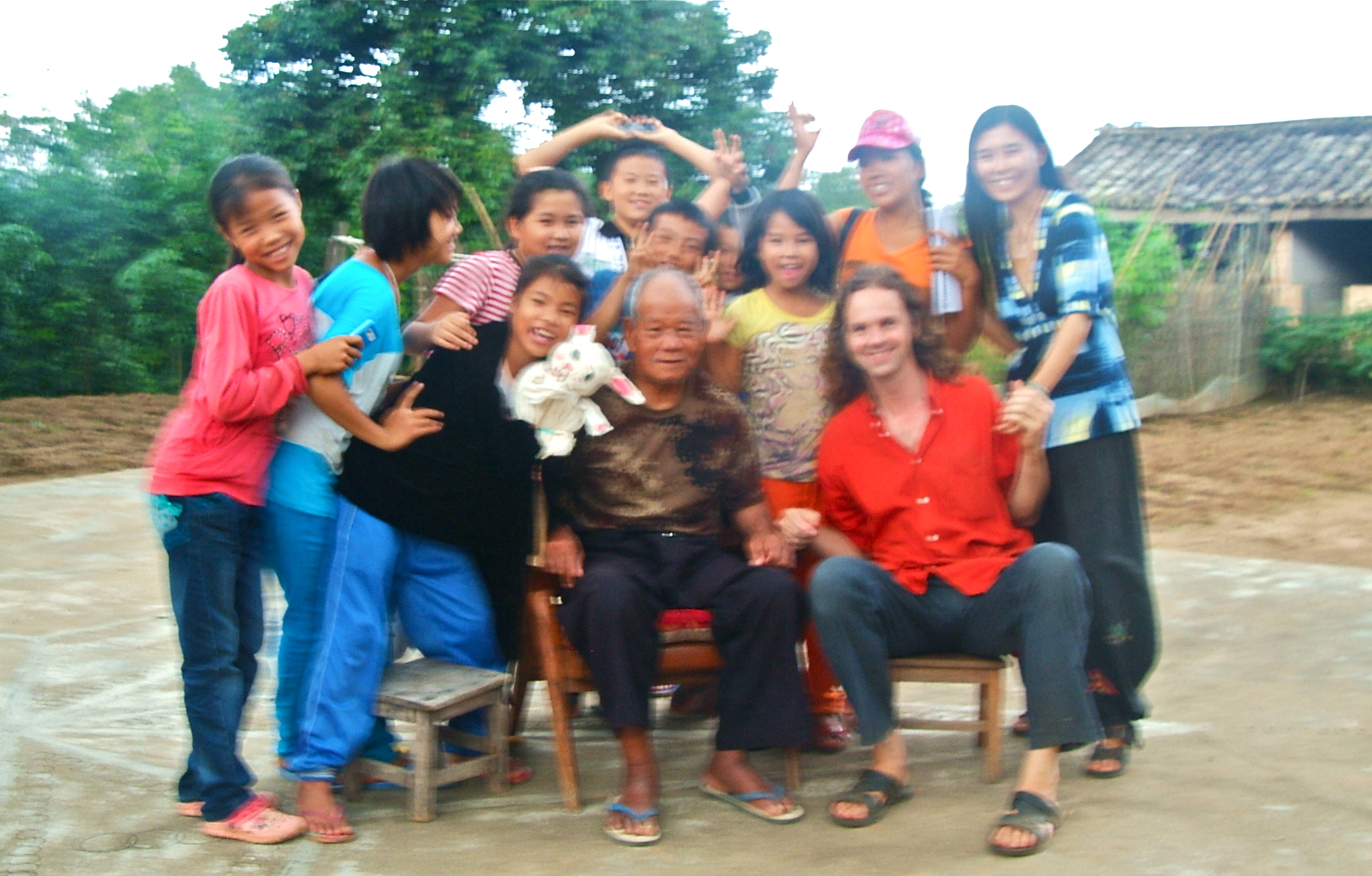 Every five days is Market Day around here and from now on I will try to keep to a similar rhythm for posting on this blog. On market day, the local farmers go

A large group from Tsinghua International Middle School in Beijing came visiting our Prop Roots center. They came to meet the local Zaiwa/Jingpo kids, that appeared in large numbers. It was a