A large group of children, from an international high school in Beijing (the Tsinghua University Affiliated Middle School), is coming in just a few days, for a joint camp together with the local ethnic Zaiwa/Jingpo kids, so we are busy preparing! (Besides meeting some deadlines on other important things. And more camps ahead...) The article below gives you an idea of what kind of camps we do here. A review of last year's Summer Camp.

Each of our Summer Camps is unique, but this 5th one was special for two particular reasons. For the first time we were able to organize this in and around our very own project center, instead of at the local primary school. This very special building (a pro bono design by Yáo Jiànjùn of Yuster.nl) has now proved to be particularly suitable for this type of activity. Even with the huge number of participants this time, our first collaboration with the organization Chengzhang, bringing a large group of children from cities from all over the country. The main purpose of this camp was to give the children of both worlds, 27 city kids and around 50 Jingpo village kids, the opportunity to become friends and enrich each other’s experiences. Their average age was about 11. 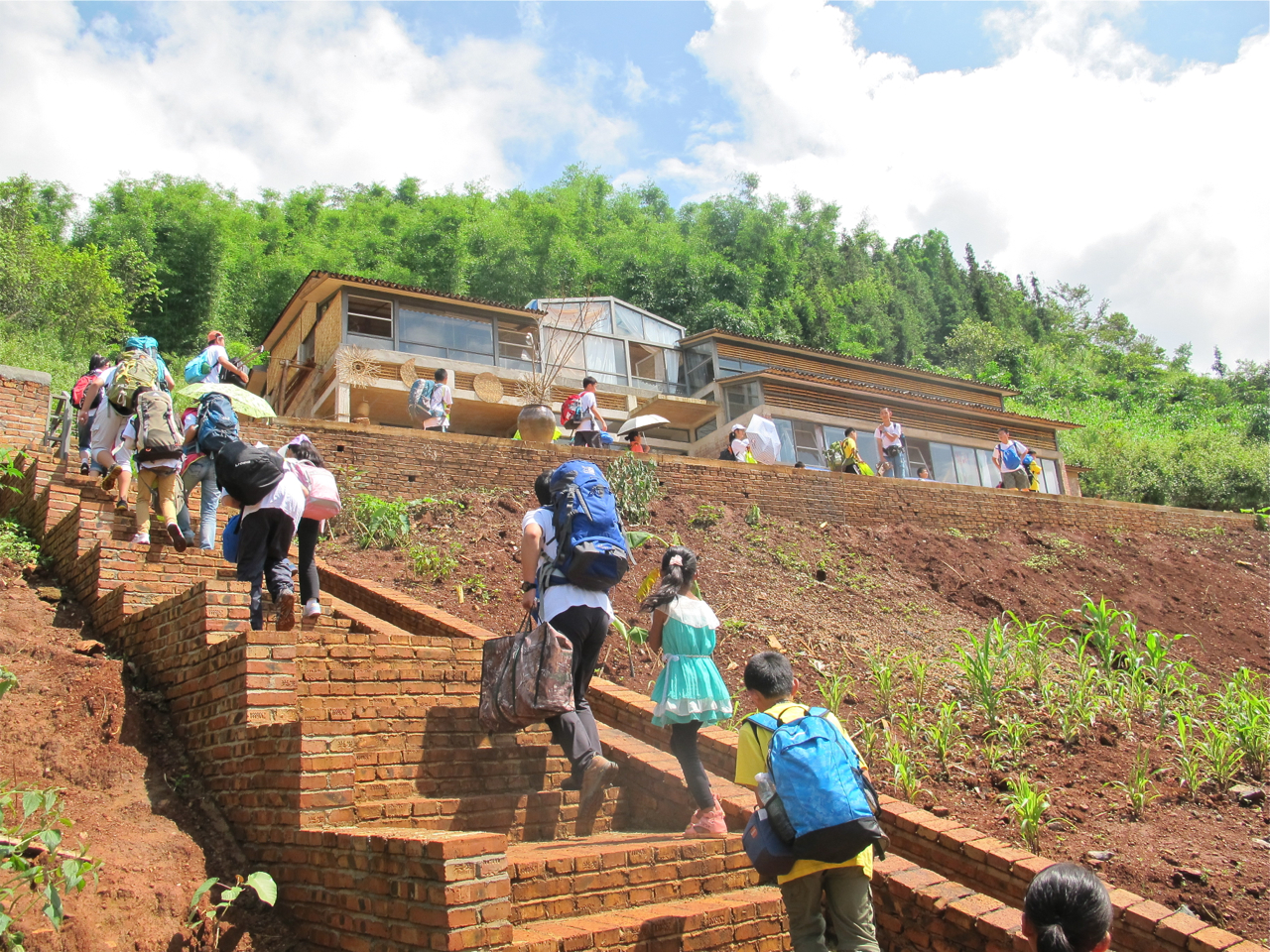 arrival of the city kids

Chéngzhǎng (CZ) is a highly professional organization providing educational trips for children, the whole year round and all over China. They know very well what kids need for their development and often deviate from the beaten track.Such as this time: the first but certainly not the last time we cooperate with them; our site will be one of the main stops when they visit Yunnan. Prop Roots designed most of this Camp’s activities, and implemented them together with Chengzhang. CZ recruited all the 27 city children from more than 10 different provinces, bring them all the way to Prop Roots Center. CZ is very experienced in managing large numbers of children, keeping them in order and in high mood. A large portion of our costs for organizing this activity (for example the art class materials and food costs for the Jingpo children) were covered by the camp fee paid by the city children.

The heart of CZ’s organization is an extraordinary and very charming couple. Each CZ member has a nickname; they are Hǎizi (“Sea child”) and Fānqiéyú (“Tomato fish dish”, also short Āfān.) Haizi is the improviser, inspirator, singer and charmer. Afan is prominent as a leader but also the main organizer behind the scenes. The idea for our cooperation was born in last spring, when the two shared a few pleasant and inspiring days with us in our home and project center. 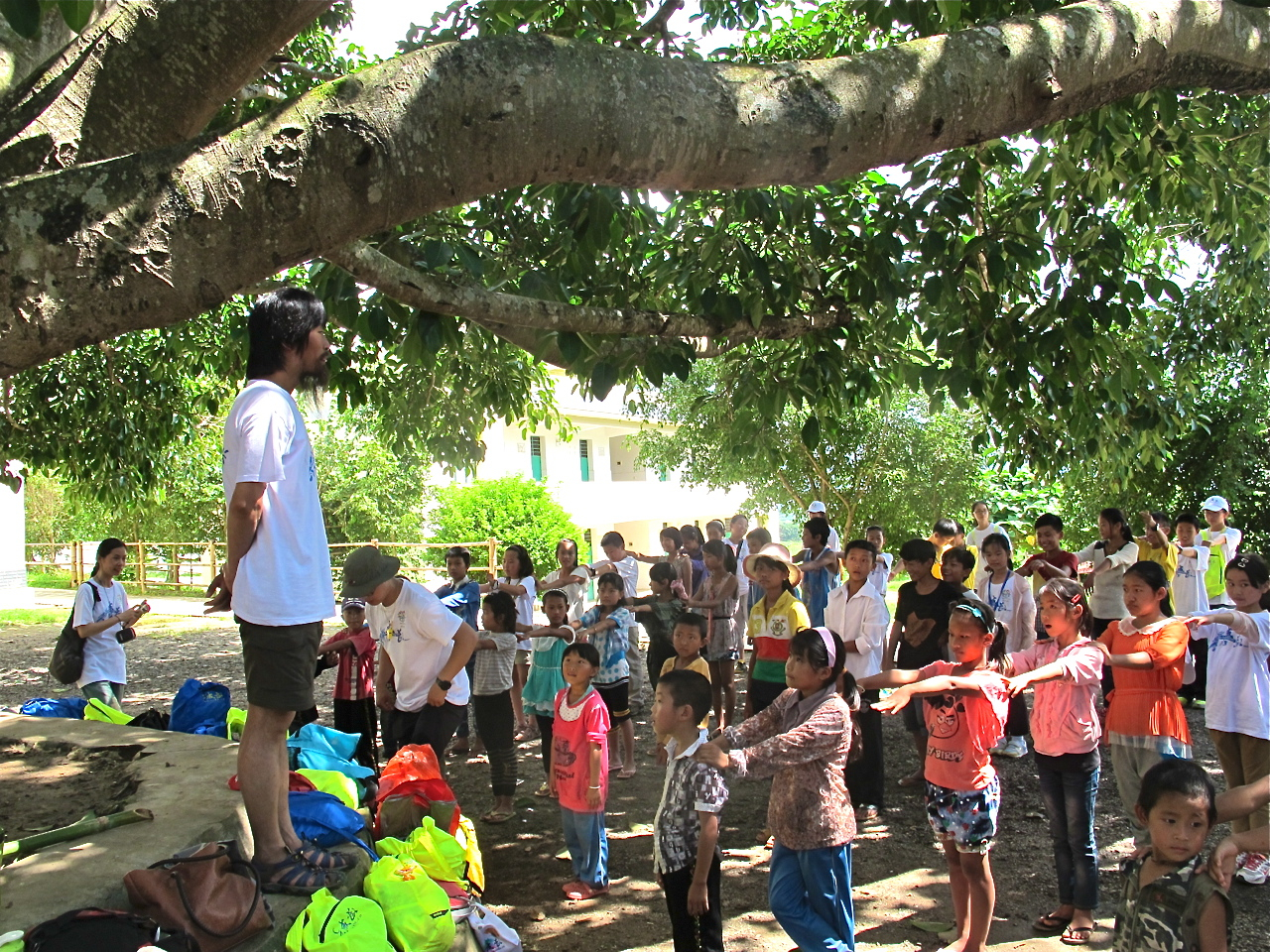 Throughout the camp the children of both worlds increasingly mingled together. Every day we alternated between indoor and outdoor activities. We made a big walk in the nature, the Jingpo kids functioning as guides, and did a treasure hunt in and around the village. We visited the bustling countryside market to buy our own vegetables, on tractors. We even swam in the river. The fist indoor activity was to make a colorful and artfully decorated envelope, which was meant for receiving secret messages. We also sewed our own Jingpo bags and printed them with leaves, and displayed them in a wild fashion show. Drama pieces were contrived, rehearsed and performed. Between the scenes there was always a lot of noisy racket going on, but at the same time also quiet reading, in the many nice books of our children’s library. In the evenings there were great movies. It was amazing how much people our center was able to take in: about 50 people, five nights in a row! It takes some creativity to design a comfortable accommodation plan within limited space and beds :-) 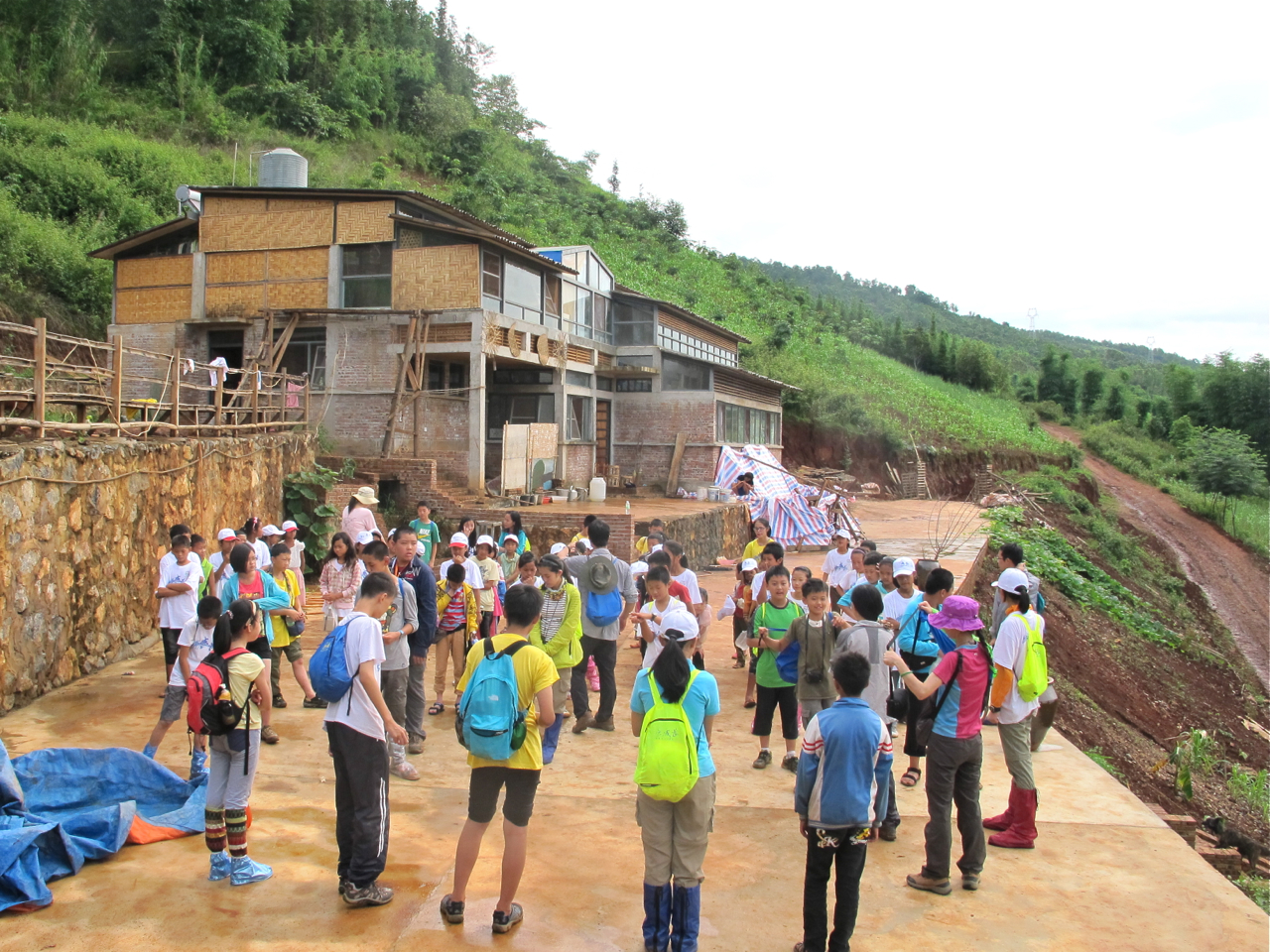 gathering before a trip 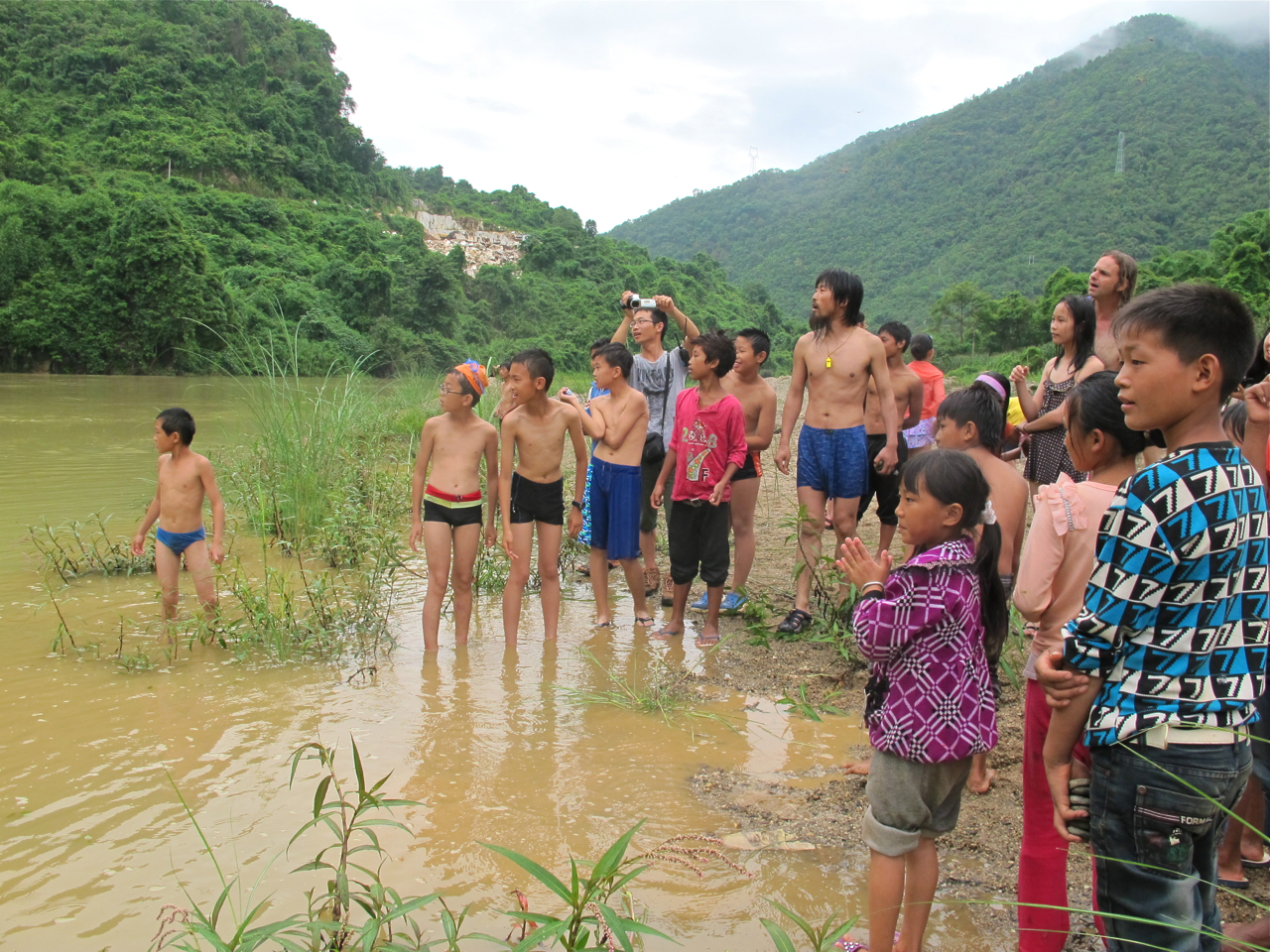 Each participant may recall his/her own personal highlights - the swimming for example - but the celebration during the last night in our colorful and atmospheric activity center must have been a great experience for everyone, filled with drama, songs, and all kinds of dancing. The Jingpo had a good chance to show their genuinely superior dance talents, performing some of the more traditional dancing, very acrobatic street dance, and amazing Michael Jackson imitations. (The last was by the same boys that already stole the show during our housewarming two months ago.) Some of the slightly elder boys and girls of both sides became rather busy with offering flowers to each other. 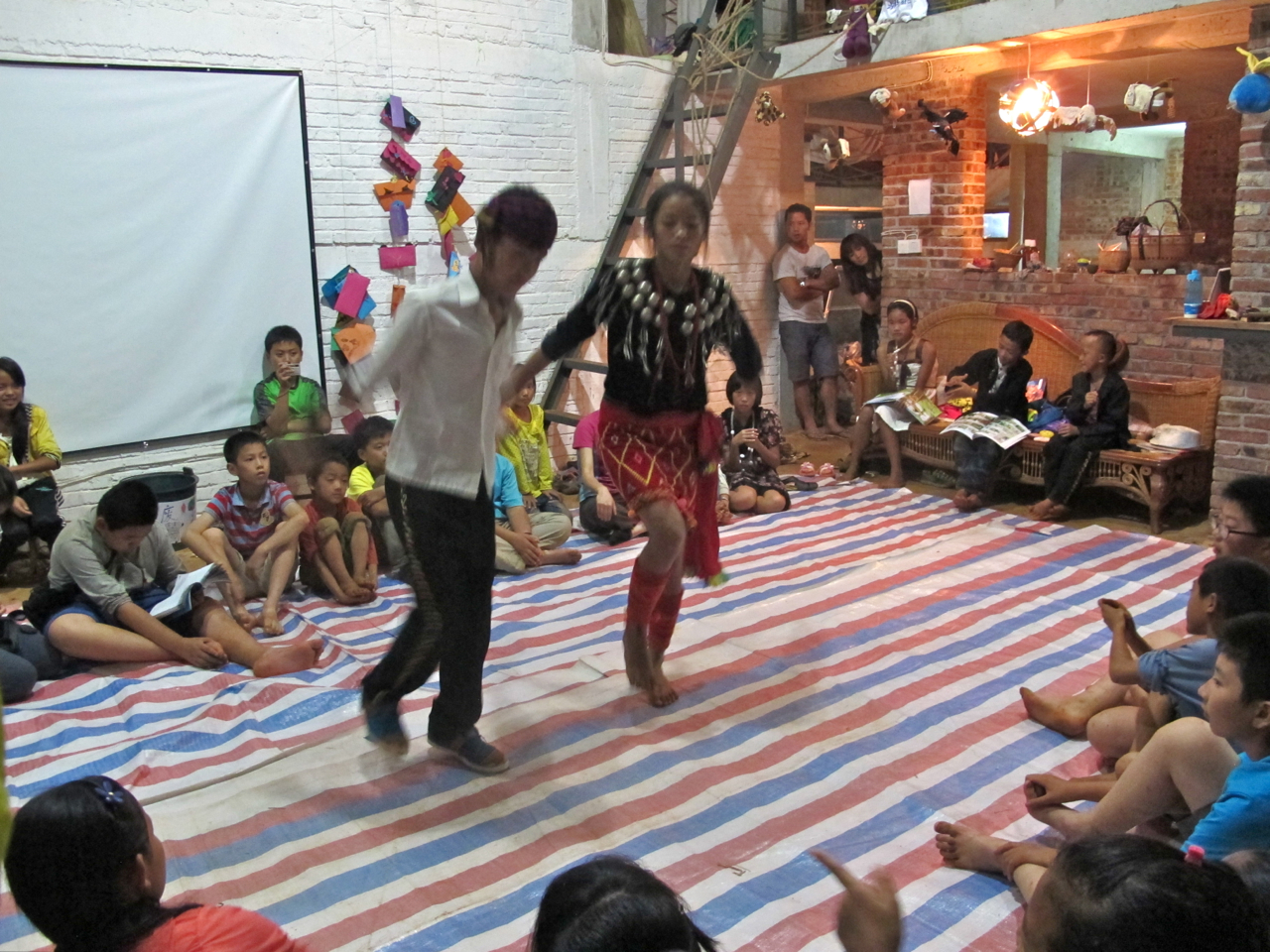 The last morning there was a slideshow with a huge amount of pictures from the past few days, which was very well received. We had undertaken so much in those few days! Prizes and gifts were handed out, and every city child got his/her Jingpo headgear. Which were for putting on immediately, because the Jingpo kids started leading everyone into the hypnotic rhythm of the traditional Manau dance, around the school’s gigantic banyan tree. 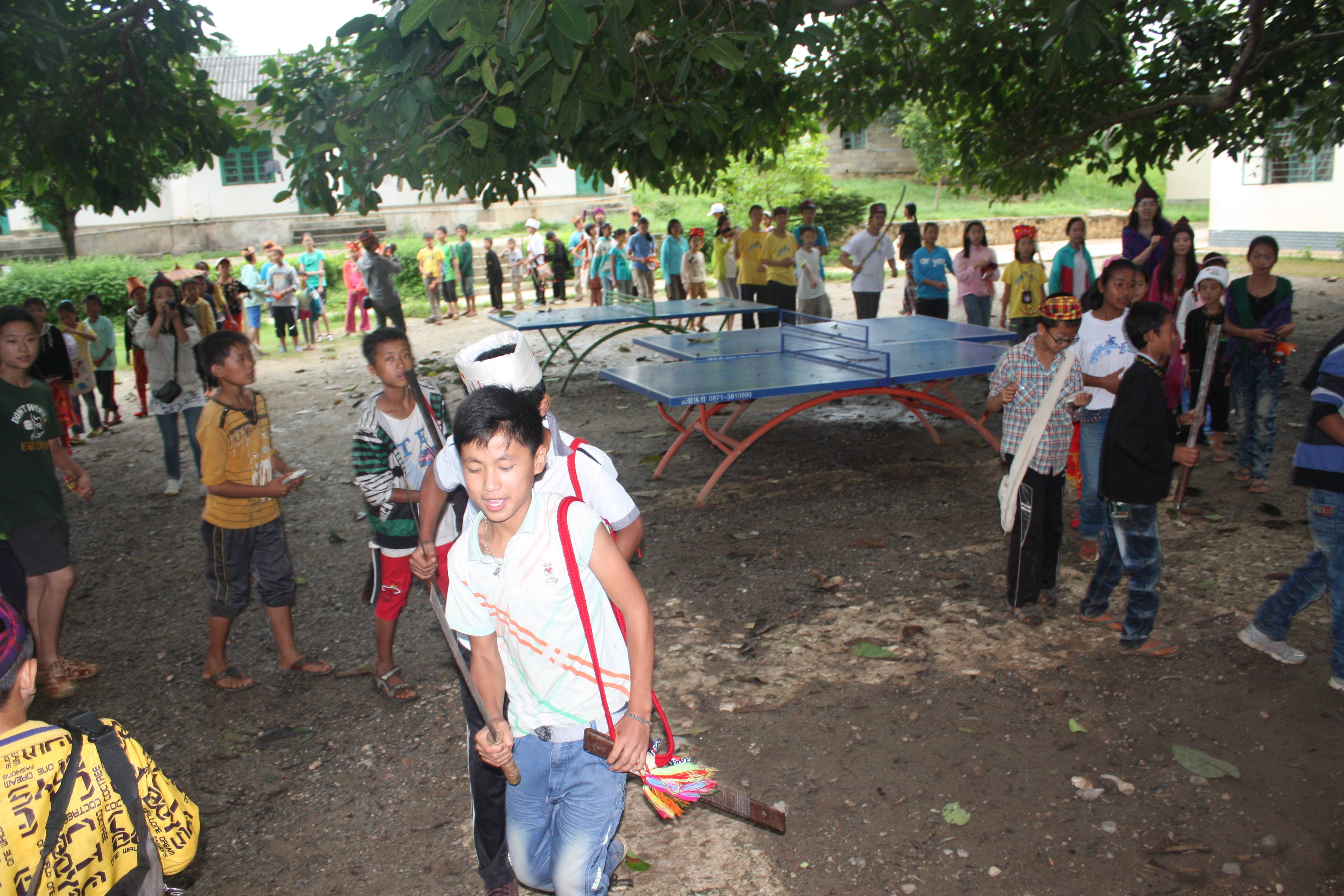 It still was a cheerful lot when everyone posed for the last group pictures. But with the moment of departing came the tears and emotional hugs. The Jingpo children escorted their friends for nearly a mile to where the bus was waiting, and then there was more crying. Indicating, of course, that a lot of affection had been built up between the city and local kids, and that they were true friends now! Afan told us that their group had still been crying for as long as they were in the bus. (Amazing how contagious such emotions are, also to grownups.) We later helped them to exchange addresses and contact info and taught the Jingpo kids how to write and send postcards to their friends from afar. 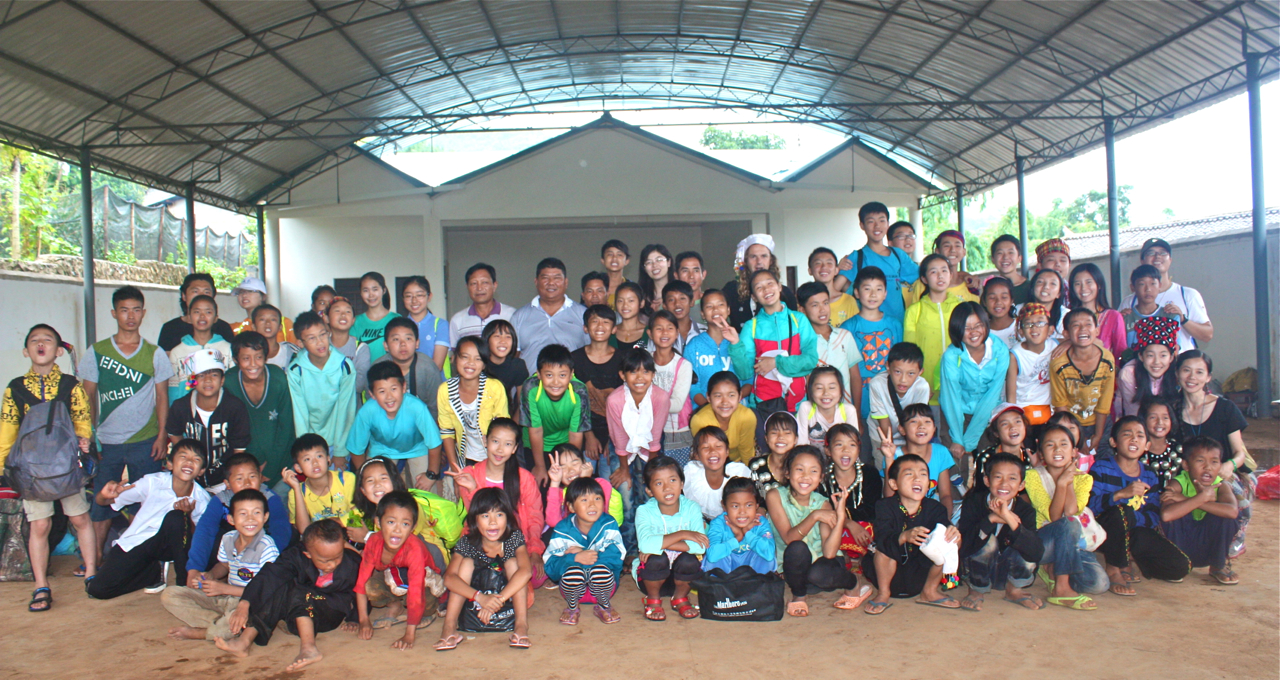 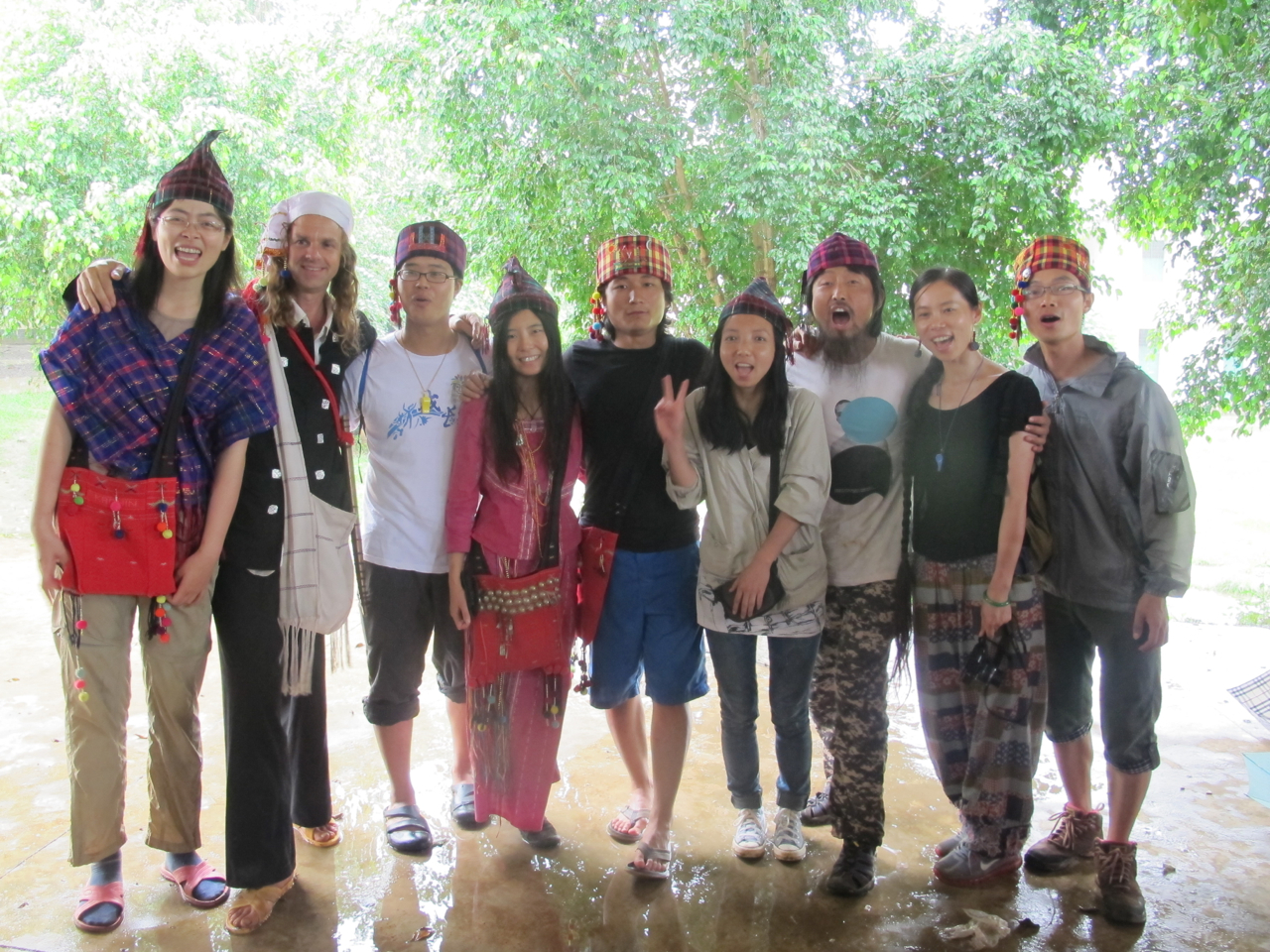 2013 summer camp team: 5 are from Chengzhang, 4 are from Prop Roots

China’s Zǎiwà/Jǐngpō ethnic minority lives in a subtropical outmost tip of the country, surrounded by Myanmar territory. That is where Dutchman Anton Lustig and his wife Lǐ Yáng lead their non-profit organization named Prop Roots Program, providing language and creative education and intercultural exchange to the local children, in order to give these kids more confidence and help them take their future into their own hands, as soon as they grow up in a society characterized by low chances, cultural erosion and massive problems around drugs and hiv/aids. Li Yang is originally a lawyer and communications expert for international NGOs. Anton Lustig is an artist, sinologist and linguist, the world’s leading specialist on the language named Zǎiwà, spoken by the majority of the Chinese Jingpo. Such as is spoken in the villages around the lush, green slope where Anton Lustig and Li Yang have erected their Prop Roots Children’s Activity, Arts and Culture Center, and where they are permanently based, joined by numerous volunteers and, of course, lots of children.

A large group from Tsinghua International Middle School in Beijing came visiting our Prop Roots center. They came to meet the local Zaiwa/Jingpo kids, that appeared in large numbers. It was a

The TV crew has left, after spending almost a month with us here in our home and project center, following or interviewing us every day. (So that’s my excuse for not posting